Saint Barbara became the patron saint of artillerymen. She is also traditionally the patron of armourers, military engineers, gunsmiths, tunnellers, miners and anyone else who worked with cannon and explosives. She is invoked against thunder and lightning and all accidents arising from explosions of gunpowder. She is venerated by Catholics who face the danger of sudden and violent death in work. 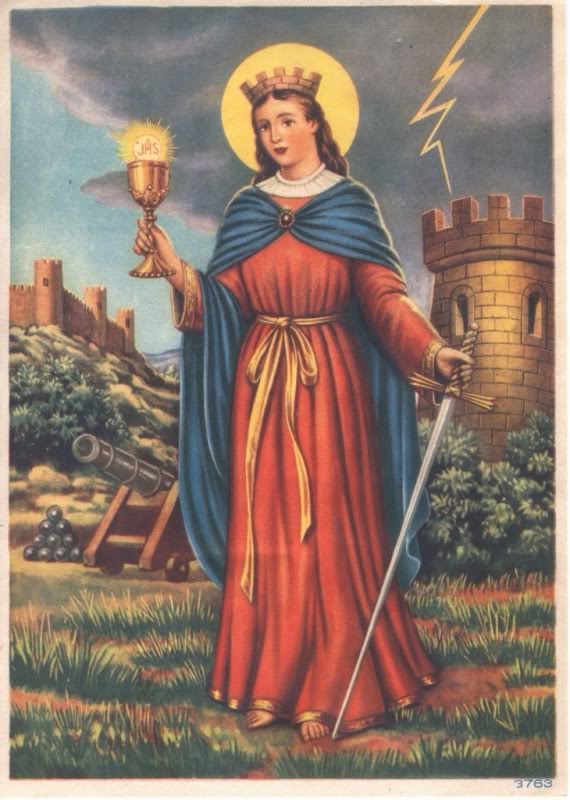 The Spanish word santabárbara, the corresponding Italian word Santa Barbara, and the obsolete French Sainte-Barbe signify the powder magazine of a ship or fortress. It was customary to have a statue of Saint Barbara at the magazine to protect the ship or fortress from suddenly exploding. She is the patron of the Italian Navy.

Within the tunnelling industry, as a long-standing tradition, one of the first tasks for each new tunnelling projects is to establish a small shrine to Santa Barbara at the tunnel portal or at the underground junction into long tunnel headings. This is often followed with a dedication and an invocation to Santa Barbara for protection of all who work on the project during the construction period.

In Greece, the day is celebrated by the Artillery Corps of the Greek Army and the Cypriot National Guard. Artillery camps throughout the two countries host celebrations in honor of the saint, where the traditional sweet of loukoumades is offered to soldiers and visitors, allegedly because it resembles cannonballs. Saint Barbara is also the patron saint of the northern Greek city of Drama, where a sweet called varvara, which resembles a more liquid form of koliva, is prepared and consumed on her feast day.

The Spanish military artillerymen, mining engineers and miners also venerate her as patron saint. Parades, masses, dinners and other activities are held in her honour.

A portion of the coast of California, now occupied by the city of Santa Barbara, California and located approximately 100 miles northwest of Los Angeles, is named after her. It was given the name in 1602, after a maritime explorer, Sebastián Vizcaíno, survived a violent storm just offshore on the eve of her feast day. A Roman Catholic missionary church, the Mission Santa Barbara, was founded there on her feast day in 1786, and is one of the twenty-one such churches that were operated by the Franciscan Order and collectively known as the California missions. 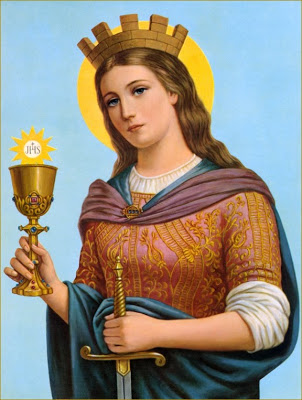 Other Spanish and Portuguese settlements named Santa Barbara were established in Brazil, Chile, Colombia, Honduras, Mexico, Venezuela, and the Philippines. Many churches in Russia are dedicated in her name, including one in Moscow, next to Saint Basil’s Cathedral, and in Yaroslavl.

In the Afro-Cuban religion of Santería she is syncretized with Chango, the deity of fire, lightning, and thunder. In Afro-Brazilian religions of Candomblé and Umbanda, she is often identified as Yansan, the orisha of wind and storms.

In Georgia, Saint Barbara’s Day is celebrated as Barbaroba on December 17 (which is December 4 in the old style calendar). The traditional festive food is lobiani, bread baked with a bean stuffing.

In Macedonia Saint Barbara’s day is celebrated as Варвара (Varvara) on 17 December. Some Macedonians celebrate with their closest family and friends at home, while others refrain, believing that people who step in their house on Saint Barbara’s day will give them either good or bad luck for the rest of the year.

In the mining town Kalgoorlie, Australia, as patron saint of miners she is venerated in the annual St. Barbara’s Day parade.

In the Irish Army she is venerated as the patron saint of the Artillery Corps and appears on the corps insignia, half dressed, holding a harp, sitting on a field cannon.

In the Czech Republic, a statue of Saint Barbara is placed near the future tunnel portal during the groundbreaking ceremony of most major tunneling projects, owing to her being the patron saint of miners.

In Lebanon, Saint Barbara’s day is celebrated by most Christians in the region. The celebration somewhat resembles the American Halloween. Children dress up or wear costumes and wander the streets from house to house singing songs about the road Saint Barbara took to flee from her father.

In Armenia, a cave shrine to Saint Barbara (Kuys Varvara) is located on the slopes of Mount Ara and lit candles and flower garlands are used as tribute.

According to the hagiographies, Barbara, the daughter of a rich pagan named Dioscorus, was carefully guarded by her father who kept her locked up in a tower in order to preserve her from the outside world. Having secretly become a Christian, she rejected an offer of marriage that she received through him.

Before going on a journey, he commanded that a private bath-house be erected for her use near her dwelling, and during his absence, Barbara had three windows put in it, as a symbol of the Holy Trinity, instead of the two originally intended. When her father returned, she acknowledged herself to be a Christian; upon this he drew his sword to kill her, but her prayers created an opening in the tower wall and she was miraculously transported to a mountain gorge, where two shepherds watched their flocks. Dioscorus, in pursuit of his daughter, was rebuffed by the first shepherd, but the second betrayed her and was turned to stone and his flock changed to locusts.

Dragged before the prefect of the province, Martinianus, who had her cruelly tortured, Barbara held true to her faith. During the night, the dark prison was bathed in light and new miracles occurred. Every morning her wounds were healed. Torches that were to be used to burn her went out as soon as they came near her. Finally she was condemned to death by beheading. Her father himself carried out the death-sentence. However, as punishment for this, he was struck by lightning on the way home and his body was consumed by flame. Barbara was buried by a Christian, Valentinus, and her tomb became the site of miracles.

According to the Golden Legend, her martyrdom took place on December 4 “in the reign of emperor Maximianus and Prefect Marcien” (r. 286–305); the year was given as 267 in the French version edited by Father Harry F. Williams of the Anglican Community of the Resurrection (1975).

The name of Saint Barbara was known in Rome in the 7th century; her cult can be traced to the 9th century, at first in the East. Since there is no mention of her in the earlier martyrologies, her historicity is considered doubtful.[10]

Her legend is included in Vincent of Beauvais‘ Speculum historiale (xii.64) and in later versions of the Golden Legend (and in William Caxton‘s version of it).

Various versions, which include two surviving mystery plays, differ on the location of her martyrdom, which is variously given as Tuscany, Rome, Antioch, Baalbek, and Nicomedia.

Saint Barbara is one of the Fourteen Holy Helpers. Her association with the lightning that killed her father has caused her to be invoked against lightning and fire; by association with explosions, she is also the patron of artillery and mining. Her feast on December 4 was included in the Tridentine Calendar, having been introduced in Rome in the 12th century. In 1729, that date was assigned to the celebration of Saint Peter Chrysologus, reducing that of Saint Barbara to a commemoration in his Mass. In 1969, because the accounts of her life and martyrdom were judged to be entirely fabulous, lacking clarity even about the place of her martyrdom, it was removed from that calendar. But she is still mentioned in the Roman Martyrology,[15] which, in addition, lists another ten martyr saints named Barbara.

In the 12th century, the relics of Saint Barbara were brought from Constantinople to the St. Michael’s Golden-Domed Monastery in Kiev, where they were kept until the 1930s, when they were transferred to St. Vladimir’s Cathedral in the same city. A small part of St. Barbara’s relics were brought to the United States by His Holiness Patriarch Filaret of The Ukrainian Orthodox Church Kyivan Patriarchate in November 2012. They are permanently on display for veneration at St. Andrew Ukrainian Orthodox Cathedral in Bloomingdale, Illinois.

Her feast day for Catholics, Eastern Orthodox and Anglicans is December 4.

To God be the Glory