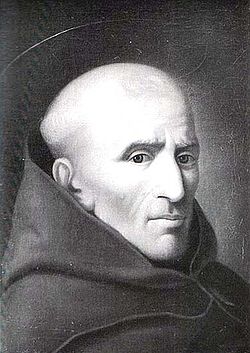 It was St. Leonard the diary of his mission was written by Fra Diego da Firenze many of his writings have been translated into the most diverse languages for example is Via Sacra spianata ed illuminata (the Way of the Cross simplified and explained), Tesoro Nascosto (on the Holy Mass),  and etc. In 1720 he crossed the borders of Tuscany and held his celebrated missions in Central and Southern Italy, everywhere the saint made conversions, and was very often obliged both in cities and country districts to preach in the open, as the churches could not contain the thousands who came to listen. Pope Clement XII and Pope Benedict XIV called him to Rome.

St Leonard founded many pious societies and confraternities, and exerted himself to spread devotion to the Sacred Heart of Jesus, and the perpetual adoration of the Most Blessed Sacrament. He was among the few to insist that the concept of the Immaculate Conception of Mary be defined as a dogma of the faith. The Franciscans had been the custodians of the Holy Sites in the Holy Land, including of the “Way of the Cross”, since 1343. Though many saints were devoted to the Stations of the Cross, few if any did more to promote them than St. Leonard as a Franciscan priest, he preached the Way of the Cross at missions for forty-three years and reportedly set up stations in 571 locations throughout Italy, including the Colosseum in Rome.

From May to November, 1744, he preached in Corsica, which at that time belonged to the Republic of Genoa. In November, 1751, when he was preaching to the Bolognese, Pope Benedict XIV called him to Rome, as already there were indications of his rapidly approaching end. The strain of his missionary labours and his mortifications had completely exhausted his body hee arrived on the evening of 26 November 1751, at his beloved monastery of St. Bonaventura on the Palatine, and expired on the same night at eleven o’clock at the age of seventy-five.

He was in no small way responsible for the definition of the Immaculate Conception made a little more than a hundred years after his death, St Leonard’s most famous work was his devotion to the Stations of the Cross.

Stations of the Cross or Way of the Cross also known as Way of Sorrows or Via Crucis originated in pilgrimages to Jerusalem and a desire to reproduce Via Dolorosa after the siege of 1187, Jerusalem fell to Muslims. 40 years later Franciscans were allowed back into the Holy Land their founder, Saint Francis of Asisi, held the Passion of Christ in special veneration and was the first person to receive stigmata. In 1217, St. Francis also founded the Custody of the Holy Land to guard and promote the devotion to holy places.

During the 15th and 16th centuries the Franciscans began to build a series of outdoor shrines in Europe to duplicate their counterparts in the Holy Land. The number of stations varied between seven and thirty seven was common these were usually placed, often in small buildings, along the approach to a church, as in a set of 1490 by Adam Kraft, leading to the Johanneskirche in Nuremberg

The Stations of the Cross (Via Crucis)

In 2007 Pope Benedict XVI approved an overlapping but distinct set of stations for meditation and public celebration they follow this sequence: