The root of humanity, bedchamber of God, and pure water: This is Mary, therefore Immaculate. 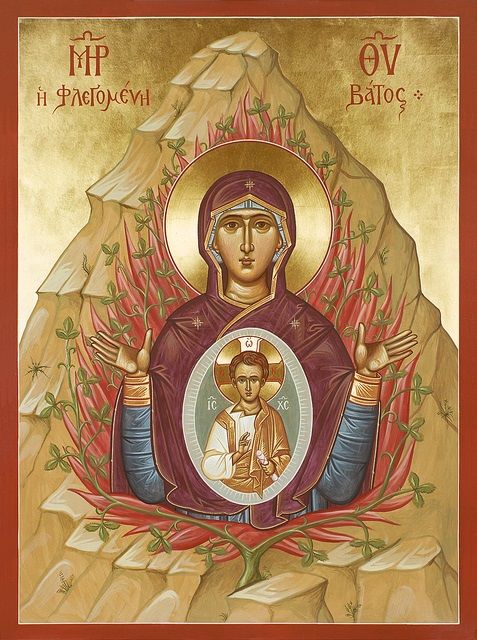 Great was the happiness of human nature in paradise before original sin, so long as man remained in the state of innocence and original justice. Then was human nature like that tree seen by King Nabuchodonosor in his dreams: tall, with its top touching heaven; wide, with its branches filling the whole world; adorned with the loveliest fronds and flowers and the best of fruits in greatest abundance. But soon, by virtue of the sentence executed by the Angel, this tree was despoiled of its goods, and, with branches and trunk cut off, was reduced to nothing—almost, except for the command that a root with a shoot be preserved safe and intact (cfr. Daniel 4,7-12). On account of sin, humanity tumbled from maximum good fortune to maximum misfortune; light was changed into darkness, the bright day into the cloudiest of nights, a full moon went into eclipse.

But from the contagion of that sin, the shoot, that is, Christ, was preserved, as well as the root (Mary) from which that shoot was to rise…We see in Genesis the root with its shoot preserved; for before a penalty for sin was inflicted on man, it was said to the serpent: I will put enmity between you and the woman, and between your seed and her seed; she will crush your head (Gen. 3,15).

When a king builds some palace to be a proper and rightful dwelling for himself and his family, he constructs it wholly magnificent, and adorns it royally as befits his majesty. In such wise did Solomon build his house (III Kings 7,1-12). Such a king will especially adorn with the greatest magnificence and riches his own chamber, where the throne of his majesty is to be placed. So too does God build His holy Church, the living Temple of God: Behold, the tabernacle of God with men (Apoc. 21,3); You are the temple of God (II Cor. 6,16), a temple made of living stones, the whole constructed with divine magnificence, as the temple of Solomon (cfr. III Kings 6,1-18). But above all, God adorned His own chamber, which is the most holy Virgin. He did so just as did Solomon adorn the holy of holies, the dwelling place of God (III Kings 6,19-36).
.
You are all fair, my love, and the stain is not in you (Cant. 4,7). The Hebrew reads: the stain not in you—without the verb is. Similarly, the verb is does not appear in Deuteronomy 32,4 when Moses said of God: A faithful God and without any iniquity. David said: Because You are a God that wills not iniquity (Ps. 5,5); yet the Hebrew for that actually reads: not a God willing iniquity You. The latter means: You never were, are not, nor will be willing iniquity; there never was, is not, nor will be iniquity in God. So too, the statement the stain not in you means that the stain never was, is not, nor will be in you. Thus must be understood (not limited to the present tense only) the statement the stain not in you.

One only is my dove, one my perfect one (Cant. 6,7). The Hebrew reads: my immaculate one. There are three words in Hebrew very similar: tham, thamah, and thamim, of which the first means simple, the second immaculate, and the last perfect. The Hebrew text here, however, uses the second. For this reason, therefore, the all-holy Virgin is unique above all queens… and young maidens (Cant. 6,7) because She is immaculate, like the purest dove, like the sun itself, which was made full of light. Hence it is written: you all fair, my love; and the stain not in you. The singular for you is used: You all; not in you; this denotes the uniquely singular grace of Mary.

The soul of the Virgin Mother of God was in Her conception like the bush with Moses, entirely intact in the midst of the flames, not consumed, unharmed (Ex. 3,2).”