Bl. Eustochium was the illegitimate child of a seduced nun, she was born at San Prosdocimo convent in Padua, baptized Lucrezia, and raised and educated at the convent. 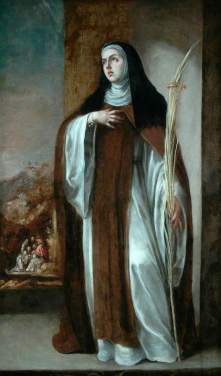 When she grew older she wished to become a nun and despite the opposition of many in the community because of the circumstances of her birth, the Bishop approved her noviceship and she was veiled, taking the name Eustochium. Though normally humble and obedient, she soon began to display strange and curious spells of unusual behavior in which she acted like a mad woman. For a time she was tied up for days and when the Abbess fell ill, Eustochium was accused of poisoning her and was barely saved from a mob of townspeople who wanted her burned as a witch. Instead the Bishop had her imprisoned in a cell; fortunately the Abbess recovered, but Eustochium was shunned by the members of the community. Her spells continued, with such manifestations as self-inflicted wounds, walking on high roofs, and being found naked in her cell with marks on her throat; on her recovery from each of the attacks, she was a model religious. At the insistence of her confessor, she was allowed to become a nun and seems to have conquered what appeared to be diabolical attacks.

In time she won the respect of her community by her penitance and holiness. She died on February 13, at which time the name Jesus was found burned on her breast. Her feast day is February 13th.