“And a great sign appeared in heaven: A woman clothed with the sun, and the moon under her feet, and on her head a crown of twelve stars.”–Apoc. 12.
.
Among the various privileges of the Blessed Virgin, the one which the Church recalls to us by the feast of to-day strikes us as being altogether peculiar in character. In regard to all the other prerogatives of Mary, they are in themselves an incitement for us, who are her children, to derive from them some benefit for ourselves, and to sanctify our lives by the imitation of her virtues. But this privilege which was granted to none but Mary, seems, exceptionally, to bear no practical reference whatever to our life of virtue. And yet from the consideration of this mystery can be drawn much that has reference to our lives as children of God. I admit: We certainly had not the happiness of entering this world free from the stain of sin; still the Sacrament of Baptism which, perhaps we were so fortunate as to receive on the very day, or even in the hour of our birth, cleansed our soul entirely from the guilt of Adam. Alas! how few preserve their baptismal innocence! How soon is it lost! And why is this? 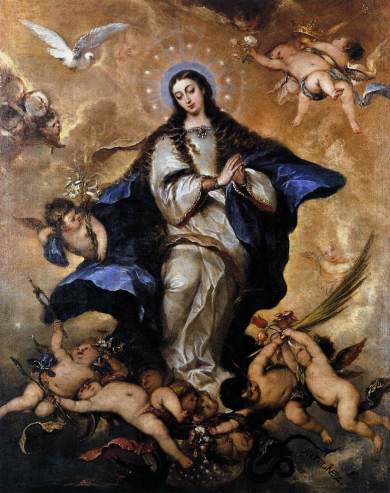 .
A glance at the image of the Immaculate Conception will give you the answer to this question. O Mary, whose child I became at baptism, beg for me the grace never to lose my baptismal innocence; or, if unfortunately I have lost it, obtain that I may again cleanse my soul from every stain of sin, by the baptism of penance! I speak in the holy name of Jesus, to the greater honor of God! What a precious boon baptismal innocence is, what an extraordinary grace, what a singular privilege! In the past five thousand years countless persons have lived who never had the happiness of receiving baptism. Although Mary was the only being among all the children of men who enjoyed the happiness and the singular grace of coming into existence, free from all stain of original sin, yet we also, who have been born of Catholic parents, have received, without any merit of our own, a most wondrous grace, in being so soon cleansed by baptism from original sin, and thereby becoming pleasing to God.
.
If we had died the moment after receiving baptism we would have immediately entered heaven, there to enjoy the beatific vision. If this fact furnishes such a potent reason for being grateful to God, must we not be filled with sadness when we reflect that so few of those baptized retain their innocence unto the close of their lives? Ask of yourself: How is it with me?

Have I never in my life committed one mortal sin? If not, oh! then thank God and rejoice. But, alas! the number of those who are conscious of this privilege is very small. As regards baptism, there are millions and hundreds of millions who share this happiness with us. But how few of these, if they die as adults, bear their baptismal innocence beyond the grave! And how few of these millions, who reach manhood or old age, have never in their life sinned mortally! I may say the large majority lose the precious grace of innocence in their youth.
.
And, you may ask, what is the cause of this? I said: That one glance at the image of the Blessed Virgin, which we are accustomed to call that of the Immaculate Conception, will give you the answer.

As is well known, we are wont to represent the Immaculate Conception in this manner: Mary is represented as a virgin, with eyes cast down, and hands folded as if in prayer. She places one foot upon the moon, whilst with the other she crushes the head of the serpent that lies upon the ground, bearing an apple in its mouth. Behold, in this image the reasons why so many persons so soon lose the grace of baptism; behold also the virtues, on the diligent practice of which depends the preservation of baptismal innocence!
.
Mary has one foot upon the earth. This teaches us, that if we wish to retain our innocence we must sever our hearts from all inordinate desire for those things which the world offers–earthly possessions, worldly honor, worldly enjoyments. We must fully understand, that whatever the world may offer with the promise of rendering us happy here below, is naught but dross and disappointment, that can never satisfy the cravings of our hearts, which were created solely for God and for heaven. But this conviction must be so entire, that we not only do not prefer the goods and pleasures of this world to those spiritual ones which our faith and the intercourse with God grant us even in this world; but that we, moreover, regard them in the same light as did St. Paul when he said: I regard all that is not Christ, as the filth of the street. You must cherish the same sentiments if you wish to preserve your baptismal innocence.
.
But, alas! this is not the case with the great majority of the children of the Church. They overrate earthly goods and enjoyments; and even in their early youth they long for them with such eagerness, that very soon this craving proves their downfall and the occasion for mortal sin.
.
Mary has, at the same time, the moon under her feet. What meaning is hidden in this? The moon is a symbol of mutability. Man but too often forms good resolutions, but as often fails to keep them; he breaks them as readily as if he had never made them. If all Christians were to adhere to the resolutions which they formed in early youth, then would they also preserve their innocence. But here lies the fault. Circumstances change: one leaves his home and enters with others on the every-day duties of life. He fails in the resolutions he made of saying his prayers, of frequently receiving the Sacraments, Of attending divine service, of reading spiritual books, and thus he becomes careless, yields to temptations, and commits grievous sins others have instilled the poison into their hearts, and entangled them in numerous occasions of sin.
.
Mary stands wrapt in pious meditation. If you wish to preserve your innocence untarnished, walk in the presence of God with recollection of spirit, and pray with fervor. The holy Fathers have justly remarked, that no one has ever lost his innocence who did not, in the first place, grow careless in saying his prayers, or neglect them altogether. And to what does the serpent, in the image of the Immaculate Conception, point? I answer: It points to the dangers of society and bad company; to the seducing power of bad example, and encouragement to evil on the part of others. This is the means which Satan employs most frequently in bringing souls to ruin. It is intercourse with, and the encouragement of persons who have already become habitual sinners, which exercise the most potent influence over innocent souls. These are in danger of gradually ceasing to regard sin as a dreadful thing; and, being led away by the persuasive language of the seducer, they depart from the narrow path, and tread the broad road which leads to perdition. Young boys and girls who have had the advantage of a religious education at home, are but too often led away in this manner, so that a few months after their first communion they are totally changed. Intercourse with and the encouragement of others have instilled the poison into their hearts, and entangled them in numerous occasions of sin.
.
Mary crushes the head of the serpent that holds in its mouth the apple of temptation. What does this signify? I answer: The reason why so many persons lose their baptismal innocence is this: They do not resist temptation at the outset, and crush its first beginnings.If you wish to retain your innocence you must follow the advice of Christ: “If thy eye, hand, or foot tempt thee, cut it off–cast it away; “meaning thereby, that we should avoid all occasions of sin, no matter at what cost. If you have lost your innocence, it was because you did not follow this advice.
.
The image represents the Virgin with eyes cast down. What does this imply? I say, if you wish to preserve your innocence, you must walk in the presence of the Lord in humility of spirit, knowing full well how weak you are of yourself in the face of temptation. This trait in the image of the Blessed Virgin says to you: Humble thyself!
.
May the invocation of Mary Immaculate obtain for us grace, that by the practice of virtue our lives may be conformable to hers, and that we, in this world of sin, may always walk pure and spotless in the presence of God! Amen!